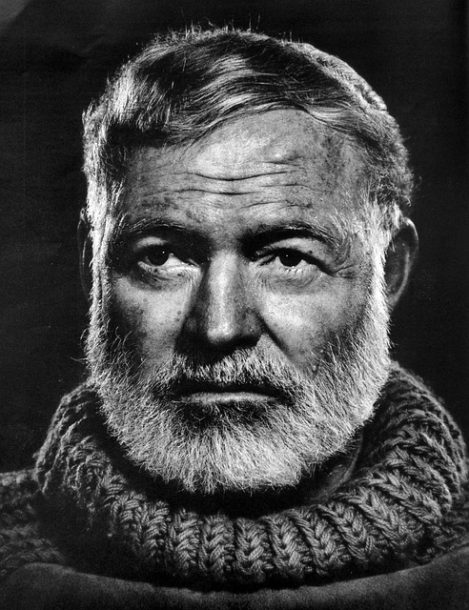 Ernest Hemingway, one of the greatest American novelists of the 20th century, wrote more than 20 novels and published nearly 100 poems. He was awarded a Pulitzer Prize in 1953 and a Nobel Prize for Literature in 1954 for The Old Man and the Sea.

Born Ernest Miller Hemingway in Cicero, Illinois, in July of 1899, Hemingway was raised with a love of the outdoors. He cherished his time hunting and fishing with his father. During his high school years, he covered sports for his school newspaper, perhaps sparking his passion for journalism.

Of his time there, he once wrote, “On the Star you were forced to learn to write a simple declarative sentence. This is useful to anyone. Newspaper work will not harm a young writer and could help him if he gets out of it in time.”

Critics believe that his journalism background shaped his uniquely pared-down and direct style of prose.

Hemingway served in World War I as an ambulance driver for the Italian Army, for which he received a medal of bravery.

He was sidelined with an injury in 1918 in a Milanese hospital where he began a romantic liaison with a nurse named Agnes von Kurowsky, an experience that served as inspiration for one of his most famous books, A Farewell to Arms.

He returned to the U.S. and took a job at the Toronto Star, eventually marrying Hadley Richardson.

After accepting a job as a foreign correspondent, the couple moved to Paris, where Hemingway quickly became part of an elite society of artists including Pablo Picasso, James Joyce, Ezra Pound, and F. Scott Fitzgerald.

His first novel, The Sun Also Rises, was written during this time; it is widely considered his finest work.

His first marriage dissolved quickly, and Hemingway went on to marry three more times. He was also a renowned war correspondent, gathering material for the Pulitzer Prize-winning For Whom the Bell Tolls.

Hemingway suffered from depression and several physical ailments, some, perhaps, resulting from his many injuries and accidents suffered over the course of his career as a war journalist. He committed suicide in his home on July 2, 1961.

Through interviews and his personal memoirs, Hemingway had much to offer on the subject of writing.

Here are some of his famous quotes.

“Write hard and clear about what hurts.” 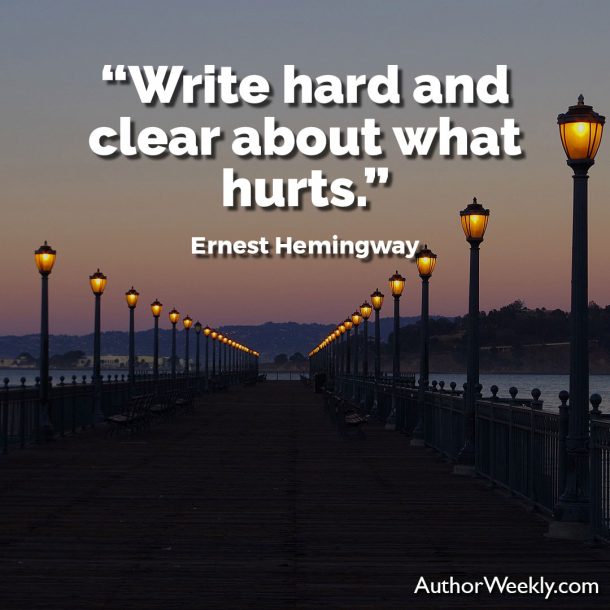 “In order to write about life first you must live it.” 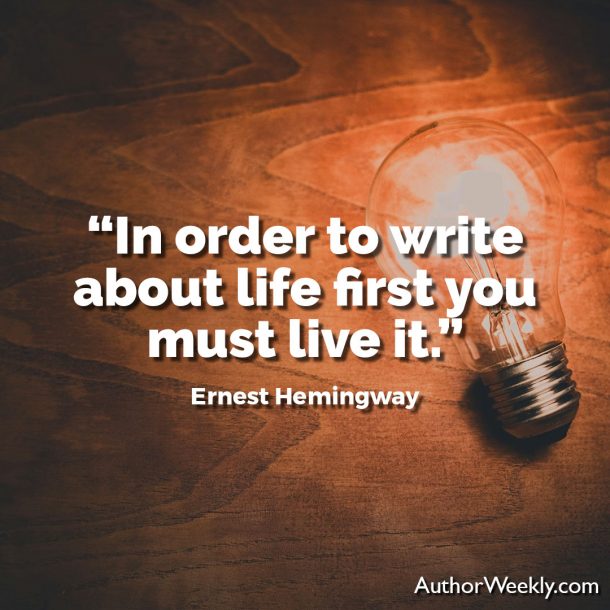 “It’s none of their business that you have to learn how to write. Let them think you were born that way.” 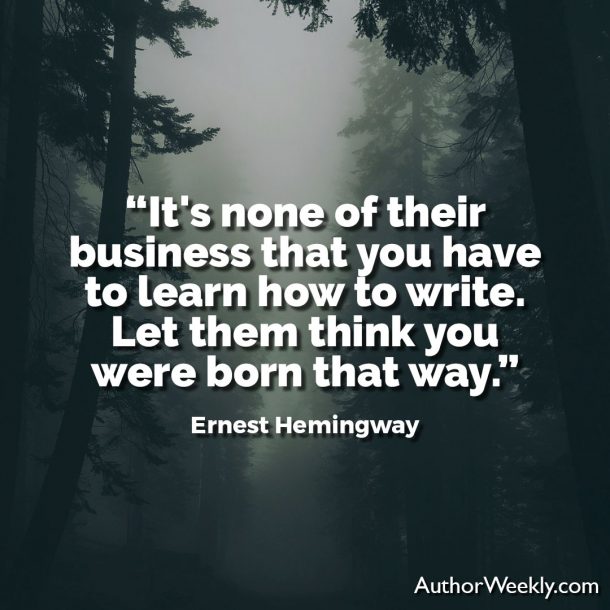 “All my life I’ve looked at words as though I were seeing them for the first time.” 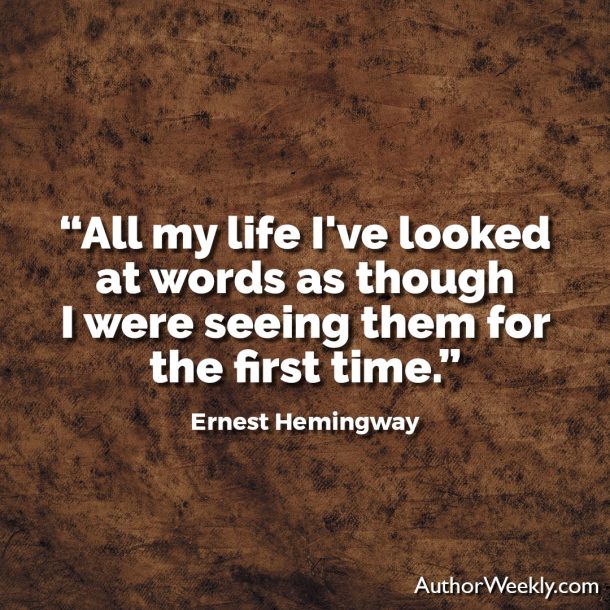 “The most essential gift for a good writer is a built-in, shockproof, shit detector.” 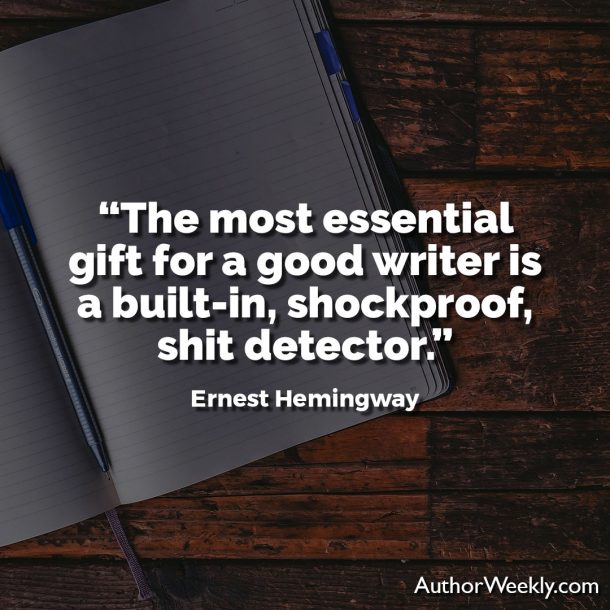 “There is no rule on how to write. Sometimes it comes easily and perfectly;
sometimes it’s like drilling rock and then blasting it out with charges.” 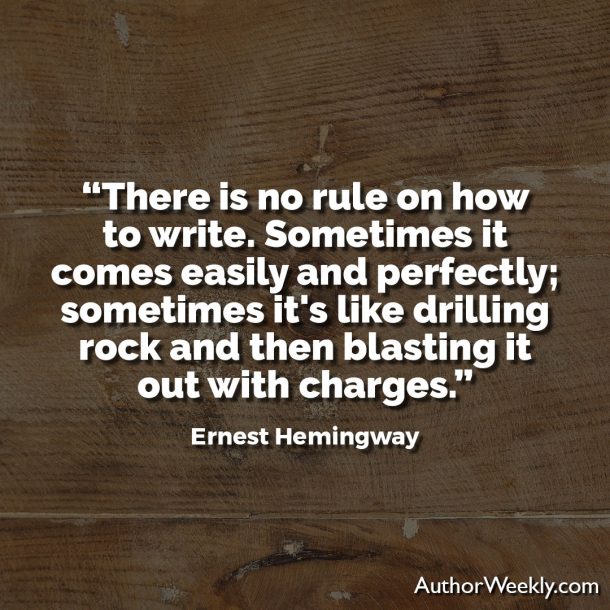 “We are all broken—that’s how the light gets in.” 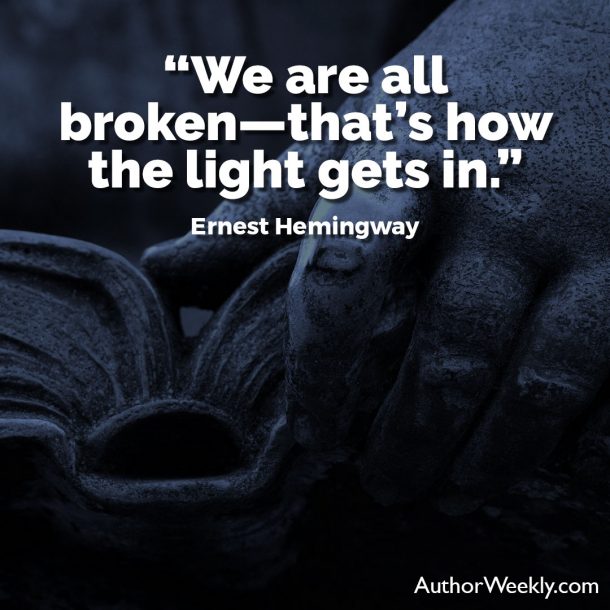 “The thing is to become a master and in your old age to acquire the courage to do
what children did when they knew nothing.” 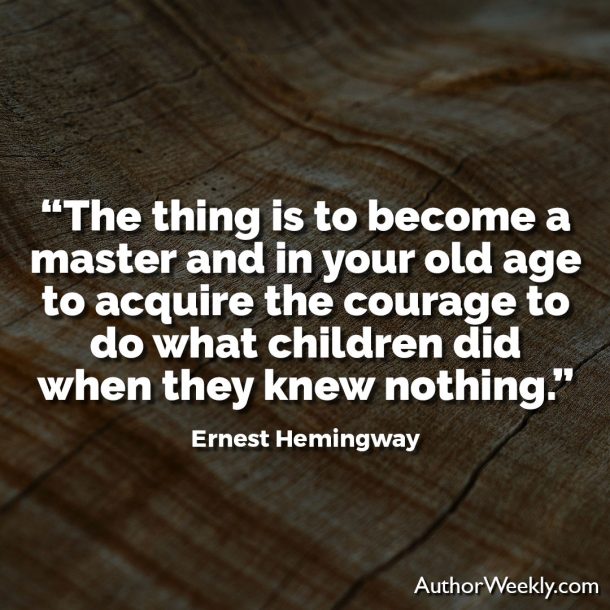 “If a writer stops observing he is finished. Experience is communicated
by small details intimately observed.” 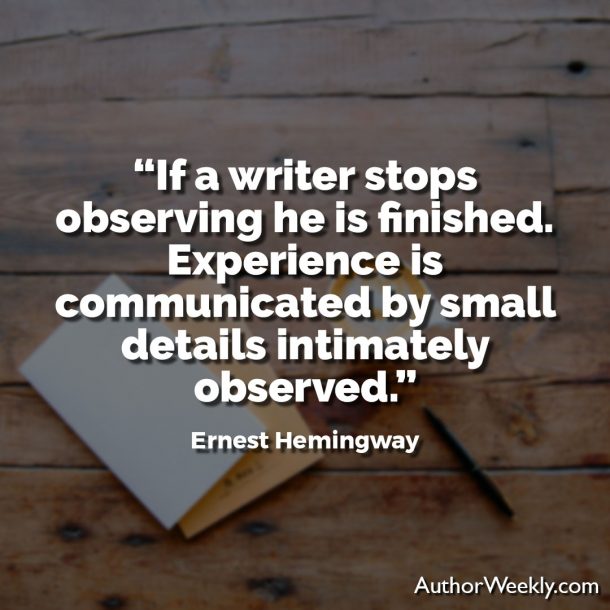 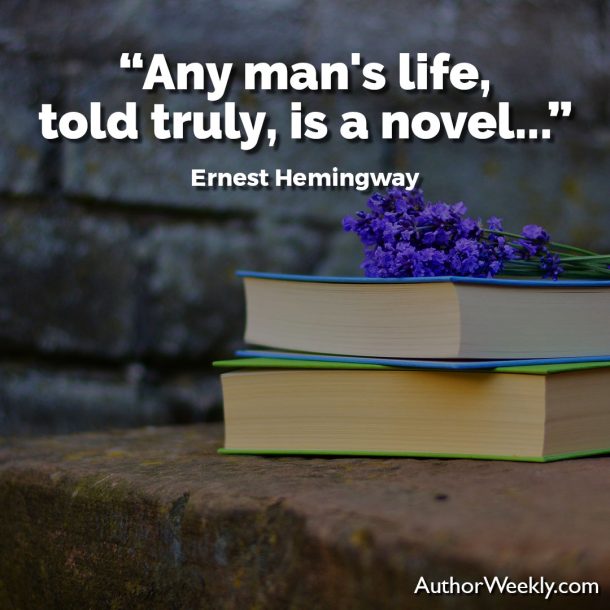 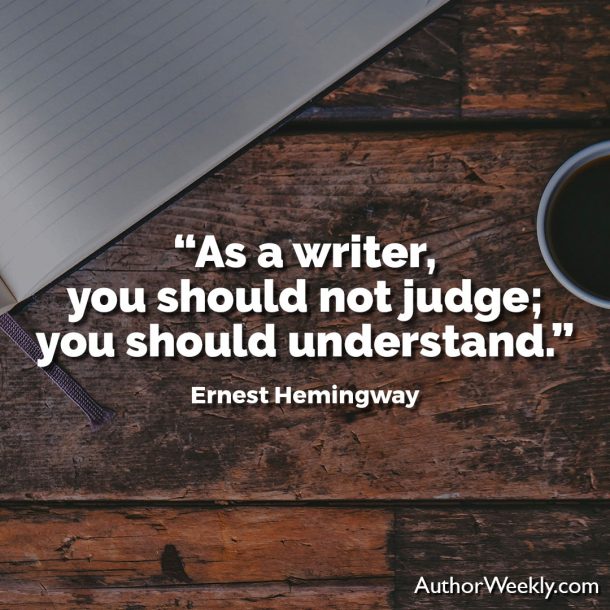 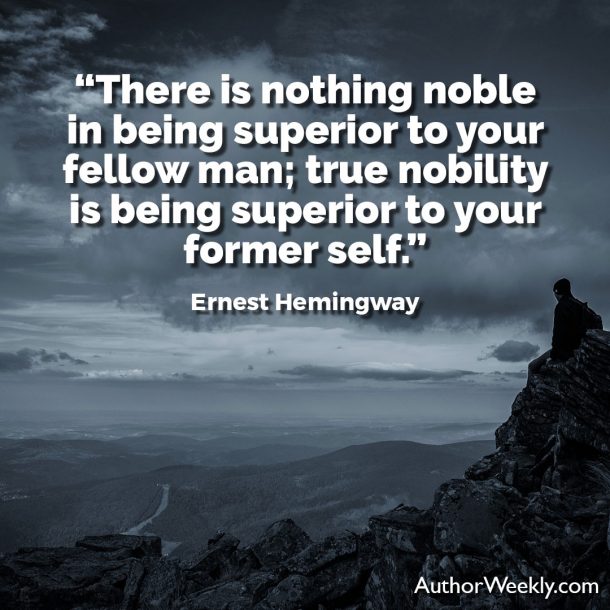 “If two people love each other, there can be no happy end to it.” 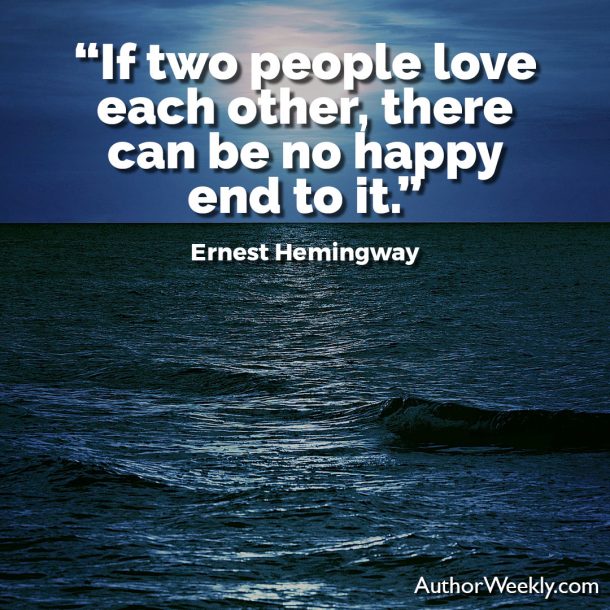 “Forget your personal tragedy. We are all bitched from the start,
and you especially have to be hurt like hell before you can write seriously.
But when you get the damned hurt, use it-don’t cheat with it.” 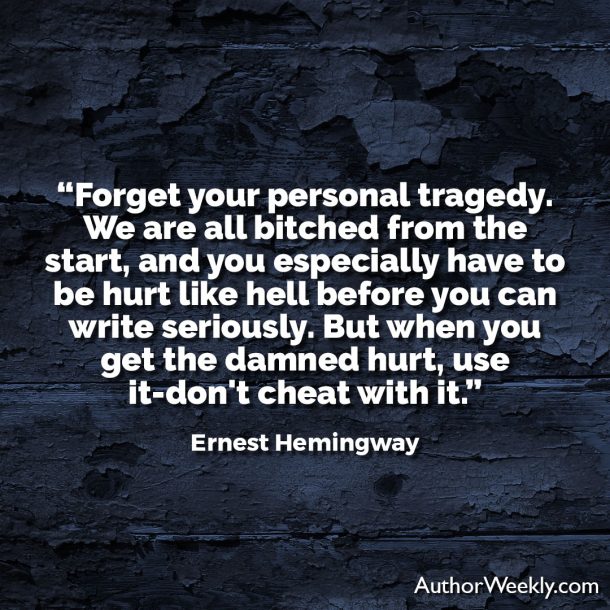 “We are all apprentices in a craft where no one ever becomes a master.” 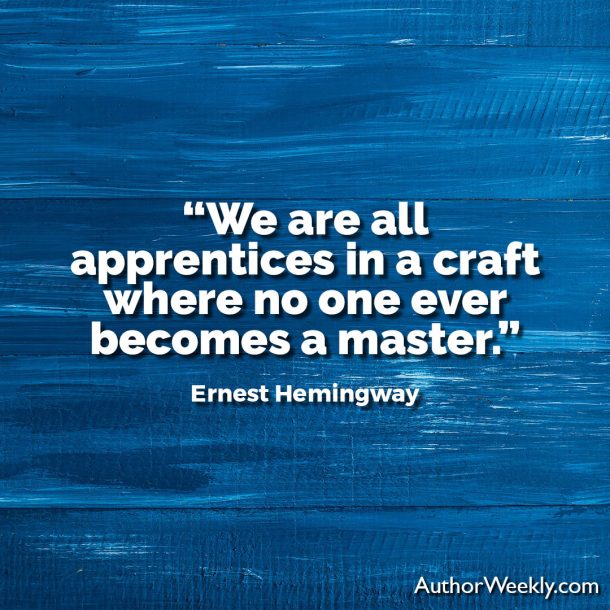 “Prose is architecture, not interior decoration, and the Baroque is over.” 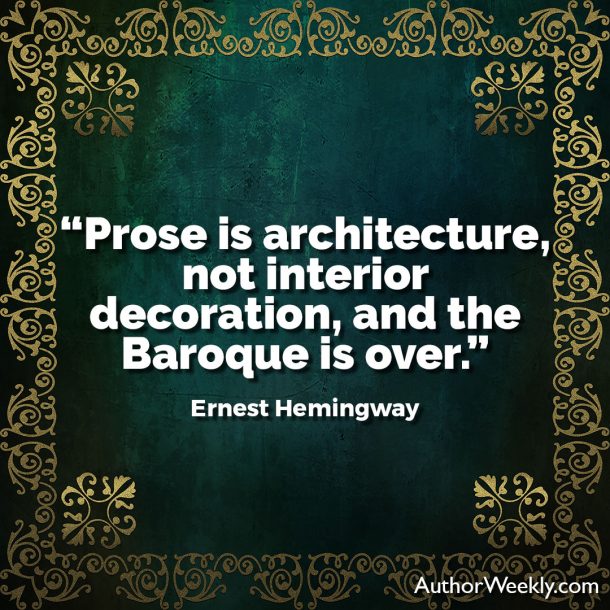 “When I have an idea, I turn down the flame, as if it were a little alcohol stove, as low as it will go. Then it explodes, and that is my idea.” 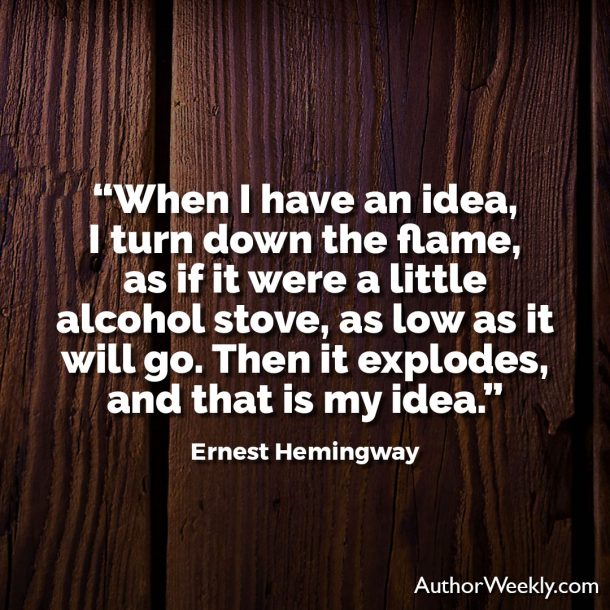 “My aim is to put down on paper what I see and what I feel in the best and simplest way.” 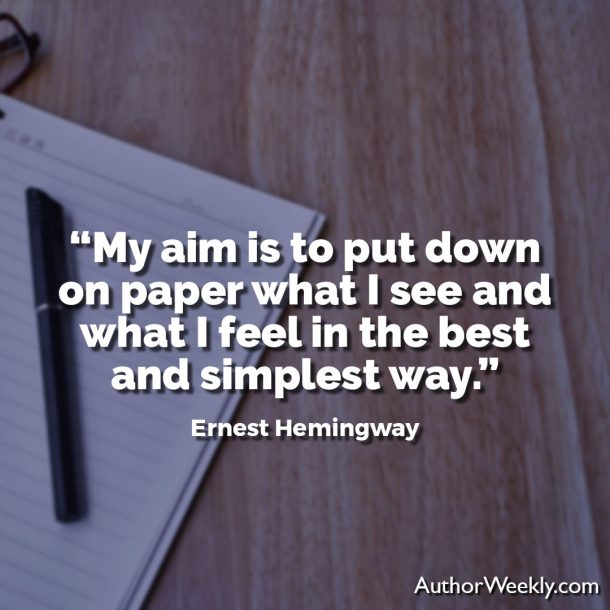 “The hard part about writing a novel is finishing it.” 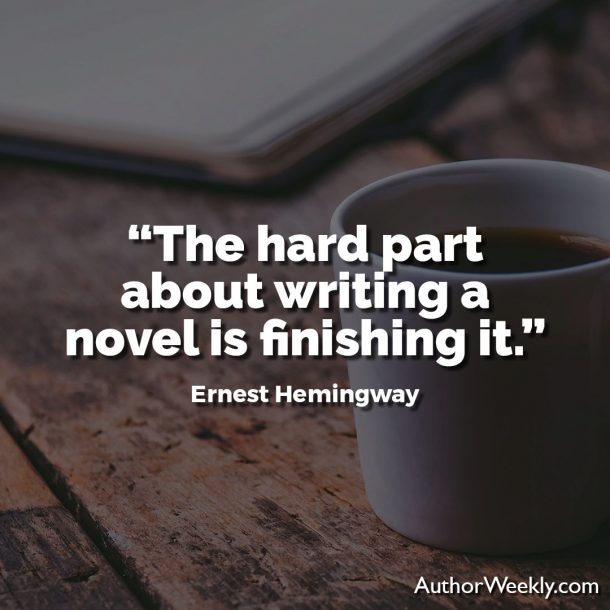 “I never had to choose a subject – my subject rather chose me.” 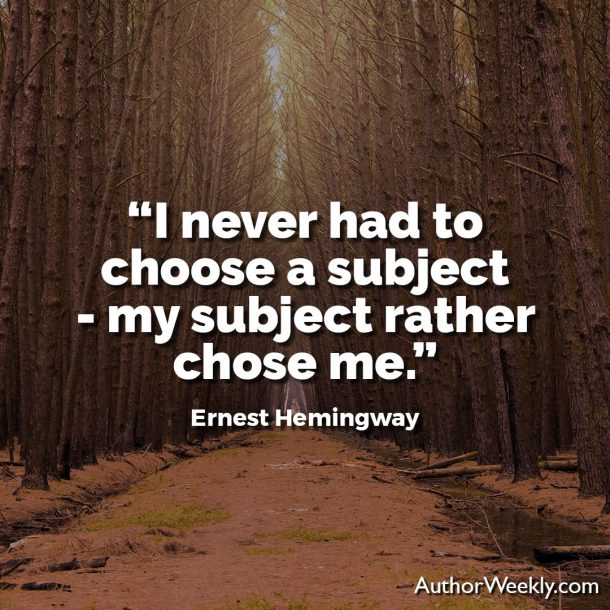 “Once writing has become your major vice and greatest pleasure, only death can stop it.” 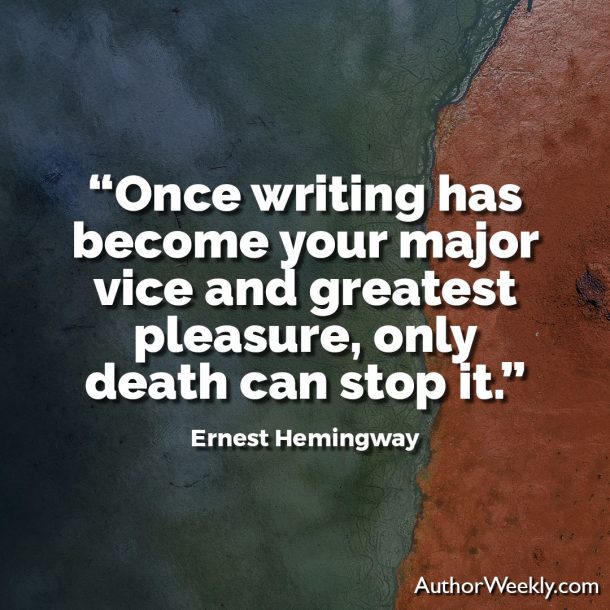 What’s your favorite Hemingway quote? Share your thoughts in the comments below.

Author Blog Writing Prompt:
Hemingway said, “We are all apprentices in a craft where no one ever becomes a master.” These are humble words coming from such an accomplished author. When you consider the term “master,” what authors come to mind? Who inspires you to take risks, to develop your craft? Compile a list, and share it with your readers.